Sébastien Buemi, Brendon Hartley and Ryo Hirakawa drove a brilliant race in their #8 GR010 HYBRID, completing 380 laps to take the chequered flag in front of a passionate crowd.

The team’s fourth one-two finish at Le Mans was secured by last year’s winners, Mike Conway, Kamui Kobayashi and José María López, in their #7 GR010 HYBRID, which crossed the line just 2mins 1.222secs behind in second.

Sébastien’s fourth win sets a new victory record for Swiss drivers while Brendon’s third triumph makes him New Zealand’s most successful Le Mans driver. A first win for Ryo, in his third Le Mans and his first with TOYOTA GAZOO Racing, makes him the fifth Japanese driver to stand in the centre of the podium. 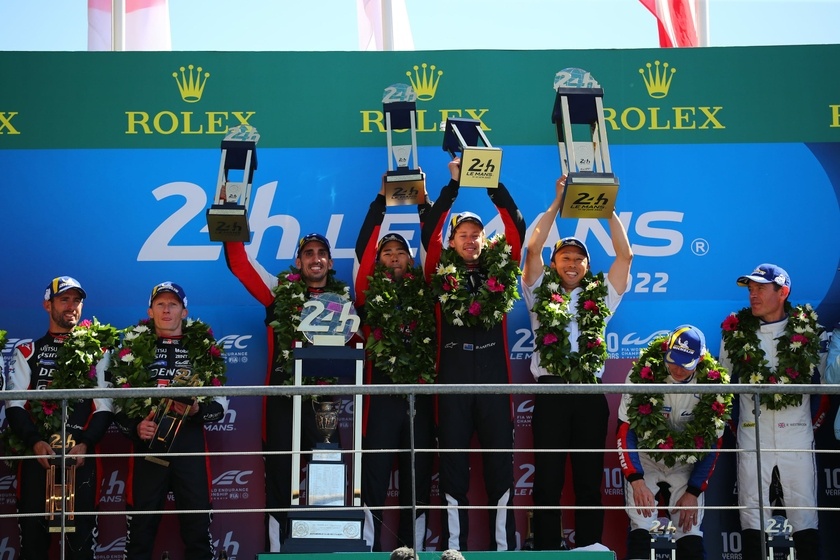 The two GR010 HYBRID Hypercars were the class of the field and engaged in a close battle at the front, with the lead changing hands several times as the race ebbed and flowed, with traffic, slow zones and track evolution all coming into play.

That contest continued for 16 hours, with the two cars running just a few seconds apart for most of that time. But the complexion of the race changed decisively on lap 256 when José pulled the race-leading #7 car to the side of the track following an issue relating to the front motor.

José performed a system reset and was able to return to the pits, where further resets solved the issue and allowed the #7 to continue at normal racing speed, albeit nearly a lap behind the new leader, Brendon in the #8 GR010 HYBRID.

With closely-matched performance, that deficit proved too great for the #7 crew to overcome, despite José setting the fastest lap of the race within the last half hour.

Brendon, following his spectacular last-minute Hyperpole on Thursday, had the honour of taking the chequered flag to win the 90th Le Mans 24 Hours. José followed soon after to complete a gruelling 5,177km of racing.

That result earned double points towards the 2022 FIA World Endurance Championship, which puts TOYOTA GAZOO Racing on top of the manufacturers’ standings after three races, 22 points ahead of Alpine. The drivers’ championship is wide open, with the #8 crew just three points of the leading Alpine trio, and #7 20 behind.

The focus will return to the fight for World Championship honours in just four weeks at the 6 Hours of Monza on 10 July.