The TOYOTA GAZOO Racing World Rally Team has completed an FIA World Rally Championship treble in style by clinching the 2022 manufacturers’ title with a superb win for Sébastien Ogier at Rally de España.

The manufacturers’ championship success follows the drivers’ and co-drivers’ titles that were won by Kalle Rovanperä and Jonne Halttunen on the previous rally in New Zealand. It’s the second year in a row that the team has managed a clean sweep of the three available titles. An especially notable achievement given that it spans a major revolution in the technical regulations introduced at the start of this season when the all-new GR YARIS Rally1 HYBRID succeeded the Yaris WRC. 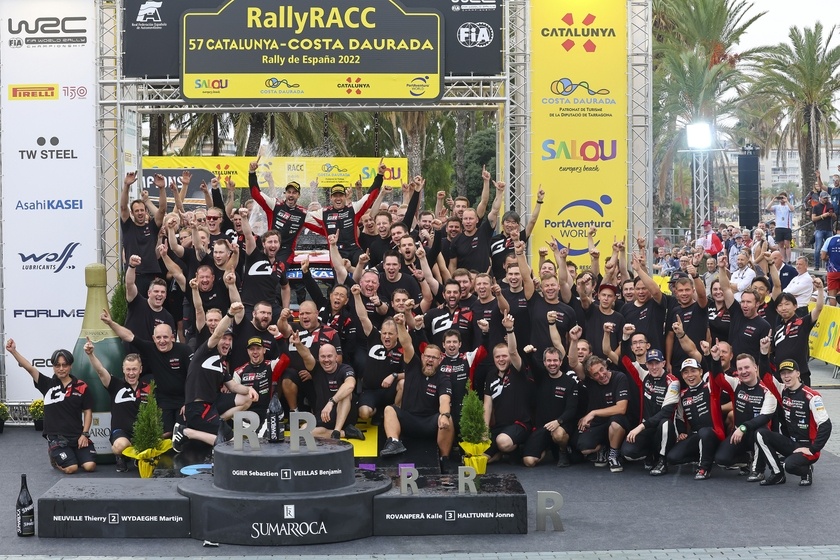 In total, this is the sixth occasion that Toyota has topped the WRC’s manufacturers’ classification, the third time since it returned to the series in 2017.

The rally win in Spain is the team’s seventh of the season and a first for the outgoing eight-time champion Ogier in his part-time campaign. The 55th victory of his career is also a maiden triumph for co-driver Benjamin Veillas.

In his first asphalt rally since January’s Rallye Monte-Carlo, Ogier was among the pacesetters from the start, winning three stages on Friday to lead despite having to deal with dirtier roads than his rivals in mixed weather conditions. He took three more stage wins in a commanding performance on Saturday as he pulled away from the pack, and went on to win the last two stages of the rally on Sunday – including the final Power Stage – as he clinched victory by 16.4 seconds.

Rovanperä was also in the battle for the lead on Friday when he was fastest in four stages, and eventually finished in third position overall. His hopes of second place faded after he was one of several to sustain tyre damage over a drain cover in Sunday’s second stage.

Elfyn Evans was part of a close-fought top five at the beginning of the rally but was unable to find the perfect feeling to match the rapid pace at the front. A flat tyre on Friday afternoon and another at the same place as Rovanperä on SS17 contributed to him finishing sixth overall – still an important result to help the team towards its main goal.

One place further behind in seventh was Takamoto Katsuta who recovered from a difficult start to show strong and consistent speed in his TGR WRT Next Generation entry.