With a look that’s entirely unique for its class, the all-new 2023 Toyota Crown brings bold style to the top of the Toyota sedan lineup. With massive wheels, a flowing silhouette, and unique paint options, it is a ride that is ready to stand out from the crowd. Toyota Crown brings ample style and the added confidence of standard AWD and the choice of two electrified Toyota powertrains, including the first-ever HYBRID MAX system. 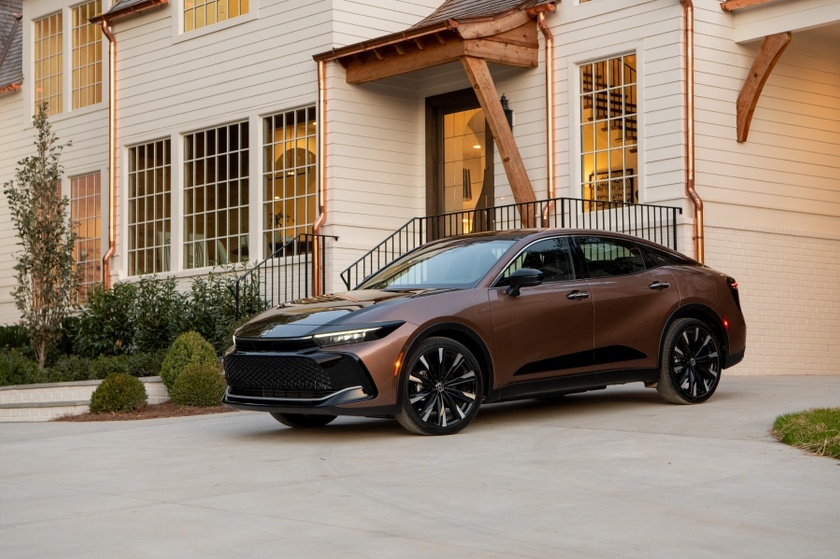 The XLE and Limited grades are equipped with the Toyota Hybrid system that pairs front and rear electric motors with a 2.5-litre engine. This highly efficient hybrid system can achieve an NRCan-approved fuel consumption of 5.6/5.7/5.7 L/100 km (city/highway/combined). The system’s nickel-metal hydride battery output has increased to support responsive acceleration at low speeds and provide a satisfying driving feel.

Built on Toyota’s GA-K platform (TNGA-K), the all-new Toyota Crown has an elevated stance that comes in-part from standard 19-inch or available 21-inch wheels – the largest ever on a Toyota sedan. The large diameter wheels lift Toyota Crown up, giving the car a strong presence that also helps drivers get a clear view of the road. The height also elevates the vehicle’s hip point, the pivot point between the torso and upper legs, measuring at about 25-inches and enables easy vehicle entry and exit.

Toyota Crown’s vibe throws off the conventions of the typical sedan with a side profile that flows to a broad rear end. The dynamic body style is amplified by rounded and sweeping character lines which give it a launch ready, head-turning look. On the inside, its spacious cabin has a premium feel that offers unique colour combinations, a full digital display, piano key controls, vertical wireless charging port, and the new Toyota Multimedia system with available 11-speaker JBL Premium audio system pack in tech and entertainment.

Toyota Crown comes well-equipped at a Manufacturers Suggested Retail Price (MSRP) starting at $45,590 for the XLE grade, $50,990 for the Limited grade, and $59,990 for the Platinum grade. Toyota Crown is expected to arrive at Toyota dealerships in early 2023.